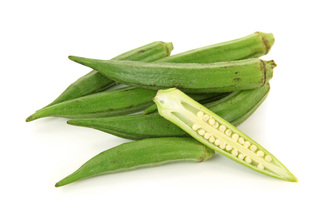 Fresh, locally-grown Okra is this week’s Fresh Pick of the Week from the Summer Certified Farmers’ Market. Okra is a Summer favorite throughout North America, and a year-round favorite in the Southeastern United States where it figures prominently into Southern and Creole cooking. Thought to have originated in Africa, Okra was brought to North America by African slaves over three centuries ago. It is usually grown as an annual in vegetable gardens, although in some climates it thrives as a perennial as well.

Okra plants can grow as tall as seven feet. The blooms are large and quite lovely, bearing a noticeable resemblance to the flowers of the Hibiscus plant (which is a botanical cousin of Okra). Flowers range in color from white to yellow, and all have a deep purple spot at the center of the flowers. The green seed pods, which are also referred to as Okra, are the part of the plant most often eaten. They are picked while they are immature; before they become too woody and fibrous. Okra is technically a fruit, but, like many other fruiting bodies, Okra is generally eaten as a vegetable.

DID YOU KNOW: Mucilage, a thick, gluey substance produced by nearly all plants, is particularly abundant in Okra, giving the seed pods their distinctive “slimy” texture. Mucilage is also a powerful thickening agent, and because it is abundant in Okra leaves, they can be used to thicken soups and stews.