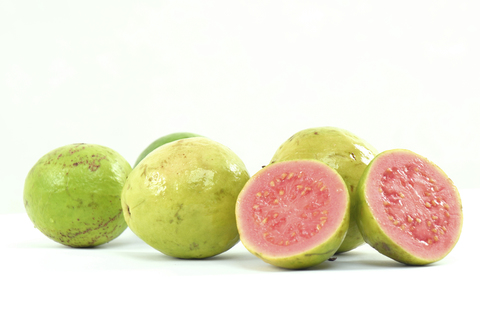 Guavas are this week’s Fresh Pick of the Week from the Certified Farmers’ Markets. Guavas are native to Mexico, Central America and Northern South America, but have been naturalized throughout the world. The most common species, and the one we have at the market, is the Apple Guava.

The simplest way to enjoy a Guava is to slice it up like an apple and eat its flesh raw. But that’s only the beginning of the myriad ways that humans throughout the world enjoy this delicious tropical fruit. Guavas are quite versatile, and are used in a variety of culinary applications which vary from one culture to the next. In Mexico, they are the primary ingredient in the beverage, guava agua fresca. They are also a popular ingredient in guava margaritas, and a key ingredient in many punch recipes. Guavas are also a popular addition to salads, and can be substituted for tomatoes in some recipes. Because they have a relatively high pectin content, Guavas are often used to make candies, preserves, jellies, jams and marmalades.

Did You Know: Guavas are officially known as the Winter National Fruit of Pakistan, and are a popular Summer snack in Taiwan, where they are sold on many street corners and night markets during hot weather, accompanied by packets of dried plum powder mixed with sugar and salt for dipping.