Certified Farmers Market Fresh Pick of the Week for January 4, 2010 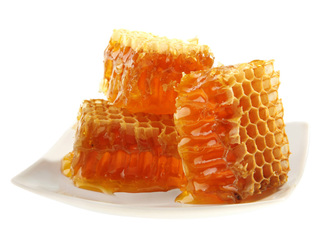 The First Fresh Pick of the New Decade has been a human food source for at least 10,000 years. Ancient humans living in what is now Spain (during the Mesolithic Period) are depicted hunting for it in cave paintings. So it should come as no surprise that by the time humans began recording their history with writing (around 2100 B.C.), our Fresh Pick was already old news!

What is it? Honey! The Labor of Love (and food source) for Honeybees, and the Nectar of the Gods for human beings.

Temecula Valley Honey sells their locally produced honey to all three Certified Farmers’ Market locations. They produce Orange Blossom Honey, Avocado Honey, and a variety of other flower and plant/tree honeys. They also sell bee pollen, honey sticks in a variety of flavors, and honeycomb honey. Their honey is all locally produced, 100% natural raw honey.

Did you know: Honeybees must tap over two million flowers to make one pound of honey, often flying a distance equal to more than three times around the world. Despite that, the average worker bee will make only one-twelfth of a teaspoon of honey during its lifetime.