Locally-grown Asparagus is this week’s Fresh Pick at the Certified Farmers’ Market, and this year’s crop is both delicious and abundant! Asparagus has been used since early times, both for its delicate flavor, and for its diuretic properties. It was cultivated by the ancient Egyptians, Greeks and Romans - all of whom ate it fresh in Spring and Summer, and dried in Winter.

Today, most of us eat Asparagus when it is freshly picked (although it is also canned, pickled, marinated and frozen). The early shoots are actually the only part of the Asparagus plant that is typically used for culinary purposes. The shoots can be prepared and served in a number of ways - stir-fried, steamed, grilled, or boiled. The best Asparagus tends to be early growth shoots (meaning first of the season), which are often simply steamed and served along with melted butter.

At the Certified Farmers’ Market, fresh locally-grown Asparagus is available at all three locations, from Lopez and Sons' USDA Organic Farm (located in Coachella), and from Ramirez Farms (located in Riverside).

Did you know: Asparagus is a member of the Lily family, and is closely related to the Asparagus Fern (although in reality neither plant is a fern at all). In gardens, Asparagus is often planted with Tomatoes because Asparagus repels root nematodes that harm Tomatoes, and Tomatoes repel the Asparagus Beetle which preys on the young Asparagus shoots.

Dr. Suess may have made a name for Green Eggs, but what about brown, blue, white, and even pink eggs! 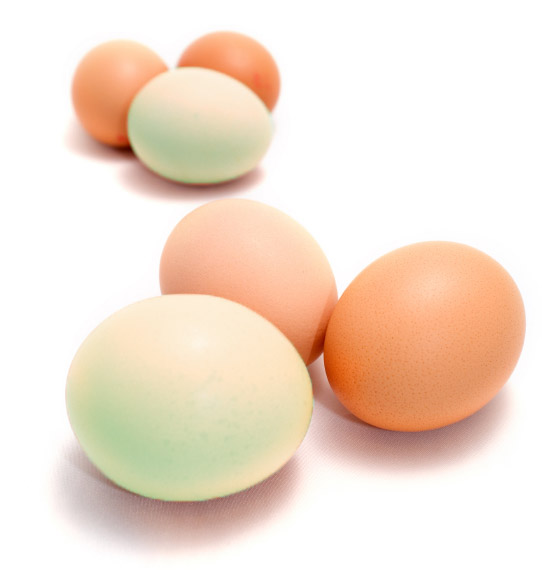 At the Certified Farmers’ Market, the eggs come in a variety of shapes, sizes and colors, and they’re all Farm Fresh, Hormone-free, and naturally delicious. Free range hens are happy hens, and their eggs are nutritious, better tasting, and better for you. Free range eggs contain about half as much cholesterol as factory-raised eggs. They are also twice as rich in Vitamin E, up to six times richer in beta carotene and four times higher in essential omega-3 fatty acids!

Did you know: Recent evidence suggests that chickens were domesticated in Vietnam over 10,000 years ago. Their eggs, which vary in color depending on the breed, and the hen, typically range from bright white to shades of brown, pink, blue, and green. There have even been recent reports of purple eggs being discovered in Southeast Asia! So much for Green Eggs and Ham!

Price: $4.00 per dozen and up. Eggs are available (in a variety of colors) from Rivadeneira Farms, Sage Mountain Organics, and Jaime Farms.

Blood Oranges are arriving at all three locations of the Certified Farmers’ Market this week, and fans of the seasonal Orange are eagerly awaiting the first of the Southern California crop. Blood oranges are especially juicy, sweet, and slightly less acidic than regular table oranges. They also have a crimson, blood-colored flesh that is due to the presence of Anthocyanin, a type of pigment common to many flowers and fruits, but uncommon in citrus. The degree to which the skin and flesh exhibit the “blood” color varies with the variety, but the unique flavor of Blood Oranges has earned them a loyal following among culinary professionals and consumers alike.

Originally from Sicily, Blood Oranges have become quite popular in the United States in recent years, and are now grown in California, Texas and even Florida. Despite increased production, however, they are still largely a seasonal crop. As a result, demand during the three to four week “season” tends to be high. Locally grown, pesticide-free Blood Oranges will be available this week from Old Grove Orange Farms in Palm Springs, and from the Original Farquhar Farms in Palm Desert and La Quinta.

Did you know: Blood oranges, like all citrus fruits, are a good source of vitamin C. But their unique color, the result of the presence of the powerful antioxidant, Anthocyanin, gives Blood Oranges additional health benefits. Chief among them are a reduced risk of heart disease, some types of cancer, and "bad" cholesterol build-up. Blood Oranges may also reduce the risk of cataracts, and aid in the body's overall healing process.

A variety of fresh, farm-ripened tomatoes are available this week at the Certified Farmers’ Market. Discover everything from Hydroponic Sauce Tomatoes (great for cooking), Big and Juicy Shady Lady Hydroponic Red Tomatoes, Huge Hydroponic Green Tomatoes (great for frying, and/or for relishes), lots of flavorful Heirloom Tomatoes (including the popular red and yellow brandy-wines, as well as about four other varieties), and, of course, vine ripened Cherry Tomatoes. Look for all your favorites (and new discoveries) at Wongs’ Tomato Farms, Ramirez/Gonzalez Farms and Jaime Farms.

Did you know: Tomatoes are actually native to the Americas and were not known at all in Europe until after the discovery of the New World. They are a member of the nightshade family, and are close cousins to tobacco, potatoes, aubergine (eggplants), chili peppers, and the poisonous belladonna plant.

In Great Britain, tomatoes were thought to be poisonous during the Middle Ages, but in Italy and Spain, they became quite popular, and were quickly integrated into local and regional cuisines – so much so, that today, we cannot imagine Italian or Spanish cooking without tomatoes!