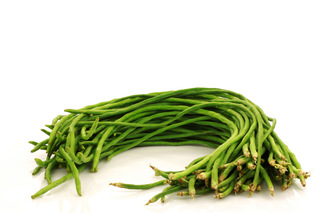 Locally-grown Chinese Long Beans are this week’s Fresh Pick of the Week. Although similar in appearance to the green beans we are all familiar with, Chinese Long Beans, sometimes called Yardlong Beans or Asparagus Beans, are not even in the same genus as green beans. They are a legume – a variety of Cowpea, but that’s really where the similarity (at least when it comes to genetics) ends. Chinese Long Beans grow on a subtropical/tropical vine that is most widely grown in the warmer parts of South Asia, Southeast Asia, and southern China.

Both the immature, tender pods, and the mature beans are used in recipes. The crisp, tender pods can be eaten both fresh and cooked.  When used in cooked recipes, they are sometimes cut into short sections for stir-fries and cooked salads. The mature beans, conversely,  are often cooked into soups or made into bean paste. The Chinese Long Beans at the market are available in two varieties, but there is no appreciable difference in taste. The difference is in the color – green or purple.

DID YOU KNOW: Chinese Long Beans  are a good source of protein, vitamin A, thiamin, riboflavin, iron, phosphorus, and potassium, and a very good source of vitamin C, folate, magnesium, and manganese. They are quick-growing and hardy, and have adapted easily to the Southern California climate.