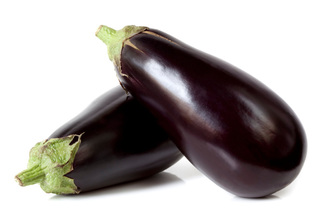 Eggplant is this week’s Fresh Pick of the Week from the Summer Certified Farmers’ Market. The Eggplant, which is also known as an Aubergine or Guinea Squash, is a member of the nightshade family of vegetables (which also includes tomatoes, potatoes, sweet peppers, and tobacco). It is native to India, and the Indian subcontinent, but has been known throughout Asia and the Mediterranean since ancient times. Although typically purple, the fruit of the Eggplant (which is actually a “berry”) can also be white, yellow, green, white and purple (variegated), and even orange. Some of the smaller white Eggplant varieties are likely the source of the “Eggplant” moniker, as their fruits really do look like chicken eggs!

Today, Eggplant is eaten throughout the world, although China, India and Egypt (in that order) remain the largest producers and consumers. Eggplant has a slightly bitter flavor and a somewhat spongy texture, and is typically cooked – roasted, baked, steamed or stir-fried. A versatile vegetable, in Indian cuisines, the Eggplant is also used in curries and for pickling.

DID YOU KNOW: You can reduce the naturally-occurring bitter taste of the Eggplant, and tenderize its outer skin, by “sweating” it. To do this, simply cut the Eggplant (with a stainless steel knife to avoid discoloration of the flesh), salt it, then let it rest for about thirty minutes. After that, simply rinse the Eggplant and cook as usual.