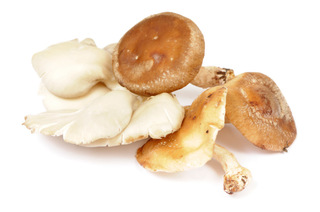 Locally raised farm-fresh Mushrooms are this week’s Fresh Pick of the Week from the Certified Farmers’ Markets. Three varieties, Portabello, Shitake and Oyster, are currently available at all market locations.

Mushrooms are the fruiting bodies of several varieties of edible fungi, and have been consumed by humans for over 13,000 years. In Egypt, they were reserved for the Pharoah and members of the royal family. In France, they were cultivated by Kings, and in China, they were used for both culinary and medicinal purposes. Many other ancient (and not so ancient) cultures consumed hallucinogenic mushrooms for religious or recreational reasons.

Did You Know: The first book dedicated to the art of growing Mushrooms was published in 1891. William Falconer, a mushroom grower from Long Island compiled the theories of a number of agricultural writers with his own ideas in Mushrooms: How to Grow Them; A Practical Treatise on Mushroom Culture for Profit and Pleasure.