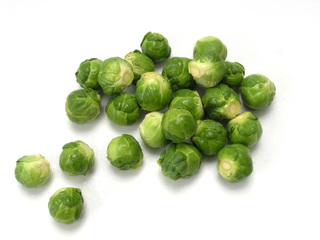 
March 23, 2009, Palm Springs, CA - Brussels Sprouts are this week’s Fresh Pick at the Certified Farmers’ Market. They are a cold season crop, and although they prefer the cool humid climate of Northern California’s Fog Belt, they also grow well in Southern California during the Winter months. Ours are locally grown, and are both chemical and pesticide free. They are available at all three Certified Farmers’ Market locations, and can be purchased individually or “on stem.”

Brussels Sprouts are closely related to cabbages, and do, in fact, resemble miniature cabbages. They grow on long stems with anywhere from twenty to forty Sprouts per stem. They are best when simply prepared – steamed and/or sauteed quickly - and not overcooked. The flavor is sweet, cabbage-like, and somewhat nutty (unless they are overcooked – then they can become bitter).