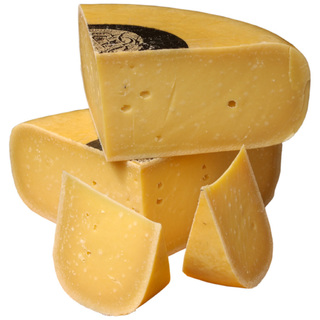 
March 30, 2009, Palm Springs, CA - Although he was born and raised in Haarlem, Holland, Jules Wesselink has been operating his own dairies in Southern California since the 1950s. As the metropolitan Los Angeles area has grown, Jules's dairies have moved from Artesia to Chino, and now to Winchester, CA. The dairy now has 500 Holstein cows that are lovingly cared for, and milked daily, in order to make Goudse Boere Kaas (homemade Gouda Cheese) in the same traditional way it has been made in Holland for many, many generations. Considered far superior to commercially made Goudas, homemade Goudas are buttery, with an almost caramel sweetness.

Winchester Farms’ Gouda Cheeses are now made by Valerie Thomas, Jules Wesselink's daughter, and David Thomas, her husband. Their Gold Medal-winning artisan cheeses are made from whole raw milk that is aged and processed using only natural ingredients, and come in mild, medium-aged, sharp, and super sharp, as well as in a variety of flavors, including Jalapeno, Cumin, Herb, and Smoked.

Did you know: Gouda Cheese is named after the city of Gouda in the Netherlands, but its name is not protected (like Champagne). “Gouda” cheese, made in the traditional Dutch way, is made and sold all around the world.